I drive a silver Honda Odyssey. It is a minivan. In fact, it may be the poster child of minivans. At any given point when I’m driving, there is another Honda Odyssey within roughly three cars of me. My van and its twins are so ubiquitous I often wave at people I know in traffic and they rarely notice me. While that type of anonymity on the roadway has its benefits, in the parking lots of Tuscaloosa it also has its drawbacks. Chiefly, trying to get into the wrong car at the grocery store, more on that in a bit.

I have never been a “never vanner,” though I do somewhat understand the sentiment. My very wife refuses to have a van as her daily driver. My overall acquiescence to the idea likely began at 15.

My parents had a full-size van when I was a young child. It was the kind with a ladder on the back, shag carpet, a couch in the back that folds into a bed, and a removable table with built-in cup holders that mounted into the floor via a chrome post and weighed 50 pounds. It was that van that taught me to be fearful of sliding doors and where I saw my mother learn you can’t throw a cup of urine out a passenger side window at highway speeds. 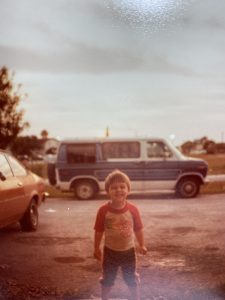 It wasn’t the old conversion van that warmed me up to vans though, it was the much sparser boxy second-generation Dodge Caravan. My parents bought the Caravan from a family friend and to save my mother a little dignity I’ll leave its previous owner nameless.

Before my parents bought it, that van tormented my mother. Our route to school in the morning took us on two Lane Road for about 10 miles, the previous van owner lived near the beginning of that route. She drove extremely slow and since we knew her, my mother refused to pass her. If my sister or I were being slow in the morning my mother would yell, “Hurry up or we’re going to get stuck behind Mrs. _________!”

After my parents bought the van we learned why the prior owner drove so slowly. For some reason, the speedometer in the Caravan was in kilometers per hour instead of miles per hour. If you stuck the needle at 55 you’d be cruising along at 34 mph.

It was this van that I was led to believe would be mine when I turned sixteen and got my license. Just the potential of having my own wheels was enough, even if it meant driving a minivan in the 10th grade. When my 16th birthday rolled around my parents surprised me with a brand spanking-new-to-our-family 1988 Ford Escort GT hatchback!

But the seed was planted.

When my wife was pregnant with our oldest I traded in my two-door Honda Accord for a four-door Toyota Camry hybrid. I called it my dad car as I couldn’t think of a more “dad” vehicle than a Camry (besides maybe a Dodge Stratus). Once my son got older and started requiring more stuff the Camry became a Honda Pilot. Then we got a dog, and that dog got big, and we got pregnant with number two, and the Pilot became an Honda Odyssey.

After we had our first child I was sent to the store for some odd or end and in my sleep-deprived state, I found myself sitting in the driver’s seat of a stranger’s car in the Publix parking lot. It was an absolute mess and I was extremely confused about where all the crap in my car came from. Eventually, the cassette/CD adapter plugged into a tape deck my car didn’t have gave it away. This car looked nothing like mine, but I had a newborn, so I figured that was a good enough excuse. I exited the car and felt the need to explain myself to someone, but nobody was paying me any mind so I got in my car and left feeling a bit frazzled.

The kicker though was on a father-son trip to Home Depot. I don’t recall what I bought, but as we were leaving there were some folks changing a tire in a car not far from mine. That must be why when I opened the tailgate and started loading my purchases I didn’t think too much about the man shouting insistently, “Hey! Hey! Hey!”

It wasn’t until after I put the first bag in that I looked up and saw the four faces belonging to some other family staring back at me. Father in the driver’s seat, mother in the passenger seat, and two kids in the middle row. They all looked confused except the father, who looked genuinely angry. For a moment, I was startled by these people sitting in my van, but then I noticed the built-in vacuum cleaner in a spot that should be a little nook where I keep an empty growler. I mumbled some apology and after not receiving a response said, “I’ll get the tailgate, I know where the button is.” and shut the tailgate feeling slightly inferior for only having the EX-L trim level. I pulled my son along with me to find my van one aisle over.

“Papa, who were those people?”
“Papa, why was that guy yelling?”
“Papa, that car looks like your car?”
“Did you know those people?”
”Why did you put our stuff in their car?”

I much prefer my indignities to be witnessed by unknowing strangers than a chatty five-year-old.

Father of 7-year-old Franklin, 2-year-old Vera, and a loving husband of 13 years. An attorney by day, finally putting that creative writing degree and 25-year-old HTML books to good use by night.

The Ice Maker Strikes Back!

That time I broke my finger at dinner.