I’ve always been a big ant fan. As a young child I’d scare my mother by sitting down in an ant bed to watch them, they never seemed to bite me. A few years later I spent countless hours playing the Maxis game SimAnt, and I’ve probably owned five or so ant farms in my life. 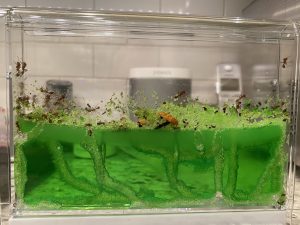 Like I imagine most ant farms, my ant farms got removed from the box, looked at, poked and prodded, then set down with the intention to, in the future, order the ants. I never ordered the ants. A little before Christmas Franklin was being awfully quiet while playing in his room. Turned out he’d gotten into his closet and drug out various unopened boxes stashed there in the aftermath of a well attended birthday party overload. He came downstairs insisting he needed a screwdriver for something. Having previously been 6 year old me, I told him to bring me whatever it was he needed open. He came trotting down with the light pack to an Uncle Milton ant farm. I sent him back upstairs for the rest of the box, and in a proud father moment, I ordered the ants.

I don’t know where I heard the Pink Panther theme sung with the words “dead ants,” but I’m willing to bet my father was involved. Well, when the ants arrived there were indeed dead ants. Not all of them, but I dare say half. The ants that survived the journey quickly set out to move all their dead buddies to one corner of the ant farm which I thought was neat. Then they’d move them back to the other side, and repeat that process about every few hours.

Ultimately they started exploring and got to work building tunnels. It was awesome to watch. Then seemingly in pairs the surviving members were drug to the dead ant pile.

I think we’re now down to one horribly traumatized ant.

Disappointed with the quality of our ants I leaned on one of my true skills in life and wrote an incredibly polite email expressing my disappointment, and inquiring if our experience was normal. Uncle Milton was kind enough to take pity on us and in their words, “replace the live creatures that expired unexpectedly.” Hopefully our new live creatures won’t mind the ghost tunnels of their predecessors.

With any luck, by spring we’ll have Lauren sold on letting us find a queen and starting our own colony. Until then Franklin and I be here watching ant videos on YouTube.

Father of 7-year-old Franklin, 2-year-old Vera, and a loving husband of 13 years. An attorney by day, finally putting that creative writing degree and 25-year-old HTML books to good use by night.

The Ice Maker Strikes Back!

That time I broke my finger at dinner.